This April at Hackito Ergo Sum in Paris and Immunity's Infiltrate in Miami, Dan Rosenberg and I presented on a technique to exploit grsecurity/PaX-hardened Linux kernels. Read on for a brief overview of our presentation and a link to the full slides and PoC code. 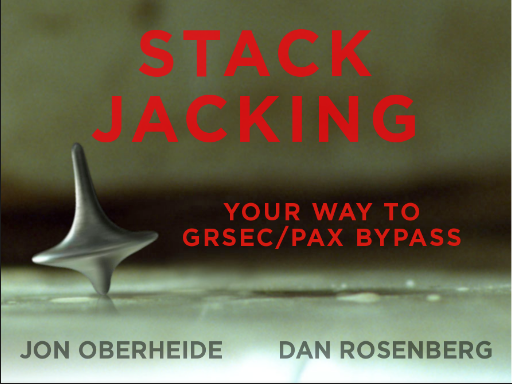 In our slides, we presented a technique to exploit a grsecurity/PaX-hardened Linux kernel (eg. GRKERNSEC_HIGH) given the existence of two exploitation primitives:

To be clear, this attack vector is completelyunnecessary when exploiting a vanilla Linux kernel, since an arbitrary write ismore than sufficient to get root, given the vast amount of useful targetinginformation Linux gives out via /proc, etc. Likewise, the kernel stack memory disclosure is also unnecessary on vanilla, since there are mucheasier ways of getting this information. However, due to GRKERNSEC_HIDESYM (which aims to remove all knownsources of info leakage), PAX_KERNEXEC (which makes global datastructures with known locations read-only), and other mitigation features of grsecurity/PaX, effective exploitation is orders of magnitude harder than a vanilla kernel and took a few interesting twists.

Our technique can be broken down into three distinct stages:

For the full details, please see the presentation materials and PoC code:

If you haven't yet read spender's response to our presentation, I recommend doing so. While I'll refrain from commenting on the political aspects of his post, I'll happily comment on the technical aspects. The fixes that spender and pipacs have released have mitigated the particular exploit vectors we used to perform the stack groping stage of our attack against the grsec/PaX kernel:

Props to spender and pipacs for cranking out those fixes as well as a number of other enhancements. While the latest grsecurity patch effectively prevents the current vectors we discovered and presented in our talks at HES and Infiltrate, there are several loose ends I need to investigate to ensure the fixes address other potential exploitation vectors.

More on that later...