Last month at SummerCon, Dan Rosenberg and I talked about our stackjacking technique for exploiting kernel vulnerabilities on grsecurity/PaX-hardened Linux kernels, in a presentation titled "Stackjacking and Other Kernel Nonsense." 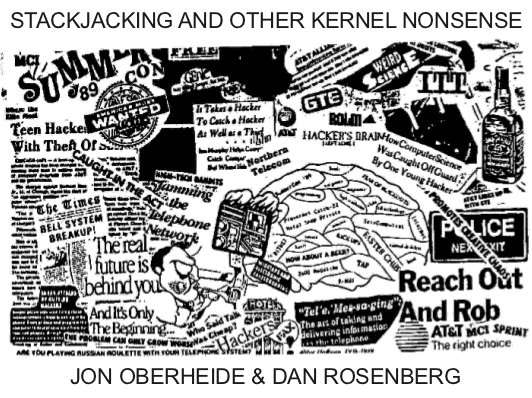 The latter item is obviously of more interest, so let's discuss that.

So, RANDKSTACK is good since it stops my method of stack groping. However, it also has some harmful side effects on kernel stack memory disclosures, the foundation of our stackjacking technique. Simply put, RANDKSTACK isbad since it effectively amplifies the "read capabilities" of a kernel stack leak.

For example, normally when I have a stack leak, we can leak off a few bytes at a particular offset on the kernel stack. If these bytes happen to overlap a sensitive pointer, say a pointer to our process's cred struct, we could leak its address and use our arbitrary write to escalate privileges. However, we dismissed this approach since it is too specific: it requires the kernel stack leak to be perfectly offset and therefore is not universal. After all, we originally developed the stack groping technique to make the stackjacking attack universal regardless of the size/offset of the kernel stack leak.

In summary, having RANDKSTACK enabled makes the stackjacking attack even easier. In addition, we no longer need a stack leak + arbitrary write, now we only need a stack leak + NULL write, a much more common primitive. A NULL write is sufficient in this case since we've cut out the whole groping stage and can simply write 0's into the uid/gid fields of a leaked cred struct. 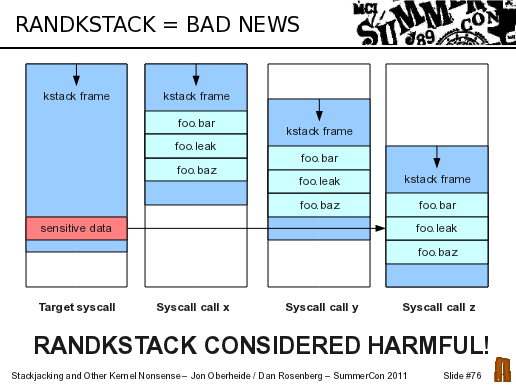 We reported this weakness to spender and pipacs soon after their original blog post on our presentation.

To mitigate this weakness, pipacs introduced a feature called PAX_MEMORY_STACKLEAK, which clears the kernel stack between system calls, something we suggested in our original presentation back in April. While this doesn't completely eliminate the risk of kstack disclosures (a kstack leak could still leak memory from a previous frame within the same system call), it covers the vast majority of the leaks, at the obvious cost of performance.